To prepare for this transition, we've been brainstorming how we will convert them to flows, specifically those that have custom plugins. Some very basic plugins can be replaced with flow logic (specifically, items that simply query a list of records or update basic fields several records in a given list) and those that make more sense to keep as code can be replaced with HTTPTrigger functions.

Creating an HttpTrigger function is fairly simple to set up in an Azure function app. You can create it directly in the portal.  Once created, it will automatically generate an Http url for you and then you can add your code. In the example below, I have 3 inputs, perform some logic and then return the response as a JSON object: 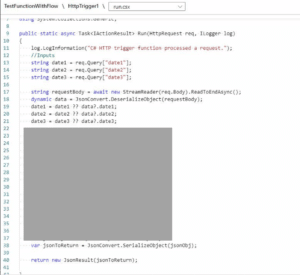 You can then easily add your HTTPTrigger function to a flow:

The steps in the flow above are the following: